Before leaving to Angeles City, Philippines – one of Southeast Asia’s many Cities of Sin – I checked with a variety of hotels regarding accommodation; in the summer time, many hotels will offer discounts, especially for long stays paying cash.  To my amazement, the majority of hotels did not even respond to my email inquiries about making a reservation.

My experience in Angeles City continues to be that the majority of establishments simply do not have their act together, but that fact comes with the territory.  Angeles has been a major spot for sex tourism ever since the military left town two decades ago and the gogo bars needed new clientele.  Do a Google image search for “Angeles City” and look what comes up.  Point-being, most hotels don’t have the pickiest of customers when it comes to service or decor.

My goal was to find a room for ₱1000 (US$23) a night in Angeles City, Philippines.  This is easy enough to do, but it’s hard to find any place that doesn’t have some pretty intolerable aspects to it, in terms of being a place of lodging compared to a place with beds to bring bar girls.

Sometimes, it’s better not to know.

The first hotel I stayed at was a prime example of that sense of what is intolerable: The Ponderosa Hotel (1734 San Pablo St., Mt. View, Balibago, Angeles City, Philippines).  Arriving at around midnight certainly did not help. 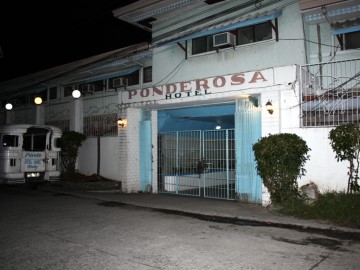 There are certain rules for tropical hotels, and the biggest rule is broken at the Ponderosa; it is full of closed hallways with no air conditioning, trapping humid air and leading to an uncomfortable environment and smell.  With the dim lighting and colorless overtones, the place looked like somewhere hookers dreams go to die.  Or, where hookers actually went to die.  It was dingy and creepy, and it was also pretty far from “the action” of Clark Avenue; I can’t imagine they do much business.  I didn’t even stay long enough to take pictures; fifteen minutes and I was history.

Trudging into The DM Residente Inns and Villas (1418 Federico St., Sta. Maria I, Balibago, Angeles City, Philippines) at 1am, I no longer cared much about price or quality, as long as I wasn’t at risk of being murdered in my sleep at any point during what was left of the night.  The staff was really rude and unaccommodating, from the front desk checking me in/out to the barkeep serving me coffee the next morning. 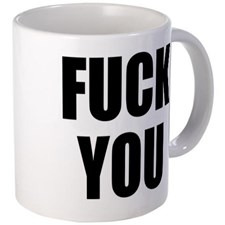 They told me they could give me a room, but only for the one night, which was fine; I was happy to vacate the place.  The so-called junior suite was typically spartan.

It wasn’t as awful as Ponderosa, but the idea that it was worth ₱1500 (US$35) for one night in their “junior suite” was absurd.  The real nail in the coffin was the shower curtain.

Dirt? Mold? Blood? Remember what I said about being better off not knowing?

Let’s suffice it to say that the whole joint looked significantly nicer on the DM Residente website than in person but, again, I’ve come to expect that in Angeles City.

The next day, it was off to The Bluefields Hotel (aka Bluefields Alpha Hotel, Blue Fields Hotel), the last option I’d contacted before arriving in Angeles City.  I saved it for last because it seemed the “safest bet” and I wanted to see what DM Residente and Ponderosa might have to offer, first.

The Bluefields Hotel is off the main strip, so it’s very quiet; the hotel has an “old feel” to it, but it’s also extremely charming. 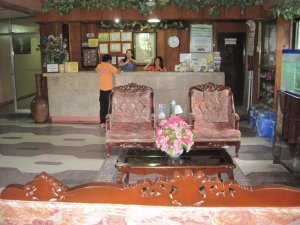 Being young, I never experienced Angeles when it was all-military, and all these little hotels catered to airmen and soldiers, but the Bluefields Hotel gives this impression that not much has changed there in the last 30 years.  It didn’t look unclean or run-down, but it did look dated – I felt like I was stepping into a time-warp, which is totally something I can enjoy.  With a sign over the front door, I imagine this place was quite the party back in the 1970s. 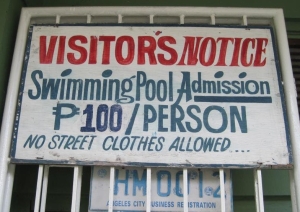 My best description of the atmosphere would be to say it felt almost like a run-down Latin American beach hotel. Look at this mural on the wall: 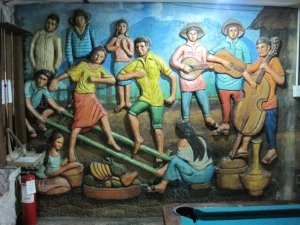 The lobby had different pieces of near-antique furniture, 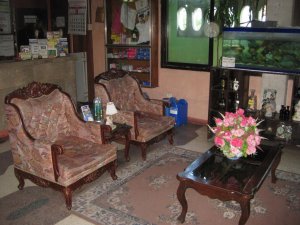 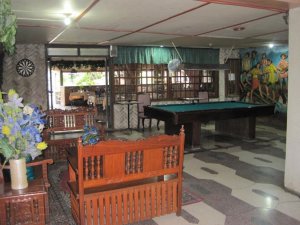 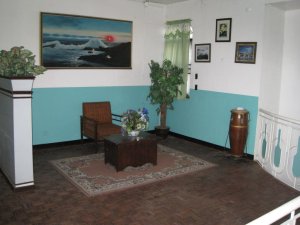 and was connected to an in-house bar/restaurant. 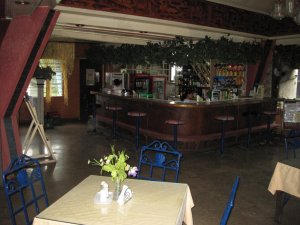 Everything was indoors but “open air,” which I mentioned before is crucial anywhere without air conditioning.  Outside the restaurant was the pool area 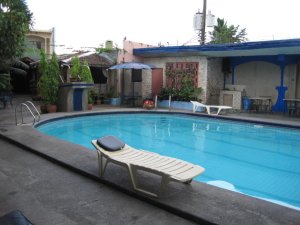 which was surrounded by breezeways full of rooms. It was really dated and there were times I felt like I needed a tetanus shot just from looking at things, but for some reason it fit the dream I had when I thought of Angeles City.  The staff was really nice and the whole place felt somehow connected to the past, and I always appreciate places like that.

Like the Ponderosa and DM Residente, being away from the main strip full of bars (though, there are at least a half-dozen bars within two blocks of Bluefields) meant it was quiet and private; it was July 1, a Friday, and I was the only person at the hotel when I checked in.  The whole weekend, I only saw three other guests.  I decided I would stay in one of their Deluxe Rooms, costing me ₱1000 (US$23) a night for a queen-sized bed, 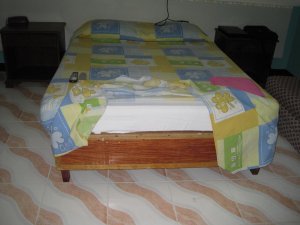 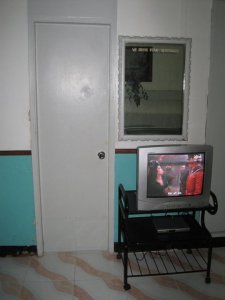 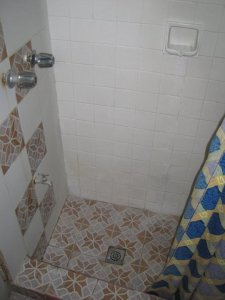 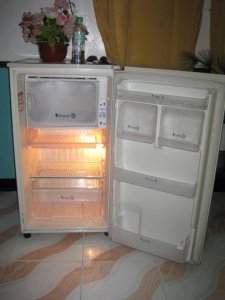 For twenty bucks, It was about what I expected.

Of course, it wasn’t perfect.  But, I never look for a perfect hotel, because problems can happen anywhere.  The key to a good hotel is the ability to quickly and efficiently address anything inadequate and rectify the situation, and in that capacity, Bluefields performed admirably.  My room had to be changed three times (faulty air conditioner; faulty shower), but each room change was accompanied by an upgrade; each room I had was really charming, in terms of decor, as well, which went a long way with me.

The 70s-era baby blue paint, accented with hand-painted red words like “please be quiet at night,” added to the style and uniqueness of it all, as did the helpfulness of the staff. 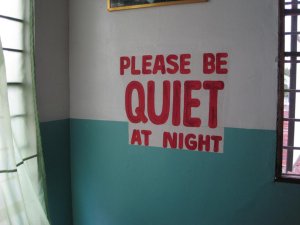 The consistency of  the restaurant was a very big relief.  I’ve had far too many food-based illnesses in the Philippines in my life, the worst of which was in Angeles only six months later, an event I discuss in another blog on here, in fact, about the Clarkton Hotel’s restaurant poisoned me.  In a totally different change in pace, Bluefields’ restaurant was outstanding.  The bar can make a drink, the food tasted good, and it was well-priced.  Not having to go up to the ultra-sketchiness of Fields Avenue every time you wanted to grab a bite to eat was nice. 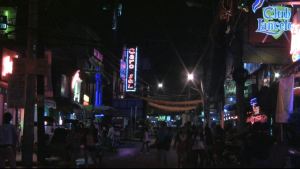 Now is a good time to mention my method of travel in the Philippines, something I will discuss in detail in another blog another time.  Here is my simple method for enjoying my stay at any hotel I stay at, when the hotels are around ₱1000-₱2000 a night.  Get a hold of plenty of ₱20 notes and shell out three-to-five a day to different members of the staff – try to spread it around and, if possible, reward good work.  Within 12 hours, you will be able to get anyone in the place to do anything you want, and will be treated well by the entire staff.  For US$2 a day, you can up the feel of your two-star hotel to that of its three-star doppelganger, simply by ensuring you are treated as a priority by the staff.

There is no question in my mind that I would stay at Bluefields again – I have seen six “economy lodgings” in Angeles and this is the best, hands-down.

The Bluefields Alpha Hotel is located at 1239 Plaridel 1 Plaridel Subd. Malabanias Rd Angeles City, Philippines; their phone number is 063-920-924-8831; their website is http://bluefieldshotel.com/.