First and foremost, they make the most fantastic burger I have ever had.  The Blue Demon: a grilled 180g (6.3oz) hand-pressed sirloin patty that you barely have to chew…topped with bleu cheese, smoked bacon, lettuce, tomato, and onion…served with hot sauce and (upon request) barbecue sauce…on an in-house-made bun…served with shoestring fries and cole slaw…for only TW$300 (US$10).  I can not over-sell this burger – it’s that good. 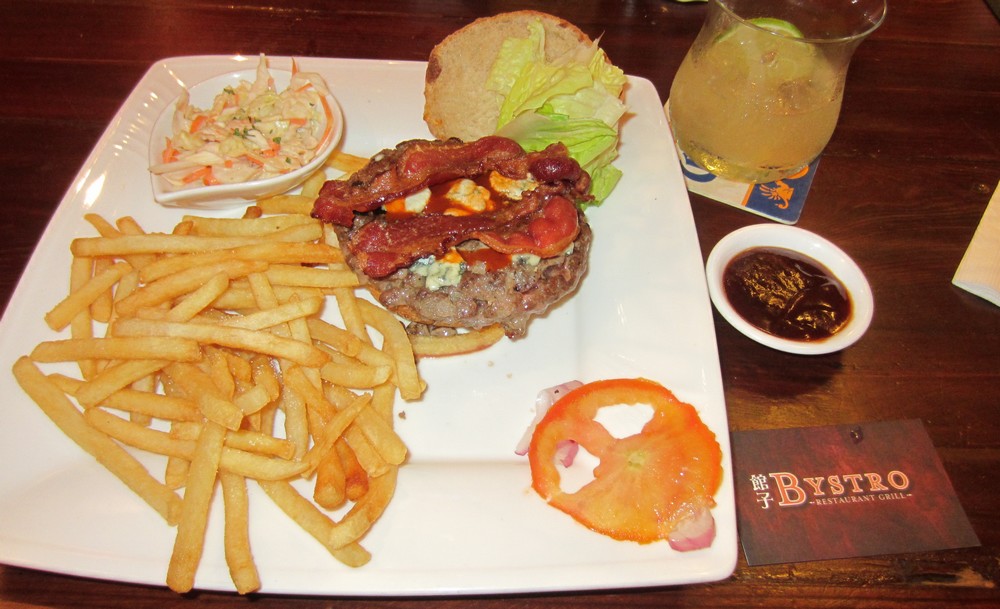 Now, you’ll notice I have a drink there.  That is one of Anita’s specialties, the hard-to-find and highly-coveted-by-me Tequila Sour.  It’s basically an extra-sour fresh-squeezed lemonade with tequila in it.  It’s my all-time favorite drink, and just like nobody makes a burger like Patrick, nobody makes a Tequila Sour like Anita.  She literally squeezes the lemons right in front of you when she makes the drink. No drink leaves the bar without her extracting a teaspoonful and taste-testing it, in an effort to constantly improve her craft.  The fact that they have a buy-one-get-one-free happy hour every day from 4pm-7pm doesn’t hurt, either.  Instead of paying TW$180 (US$6) for that drink, I’m paying half that, which is an absolute steal.

The crowd is a good mix of native Taiwanese and foreign businessmen.  Local expats certainly show up, but with their sense of what they feel prices for a meal/drink should be, it’s often cost-prohibitive for them.  But for anyone who’s lived “back in The World” during the last decade, a ten-dollar burger that looks/tastes like that is one of the best deals there is.  Fish and chips will run you TW$260 (US$9).  Most of the pizza and pasta dishes will cost around the same, give or take TW$30 (US$1).  The best value on the menu, though, is most expensive item: the ribeye, which will run you TW$880 (US$30).

Service is extremely important to Bystro.  While Patrick runs the kitchen and Anita runs the service-end, they do their share of cross-training.  You’ll often find Patrick coming out of the kitchen to observe the restaurant, a trait virtually never seen in a chef.  Anita, as well, bakes bread, pies, tarts, and filled-to-order cannoli (because there’s nothing worse than soggy cannoli).  They work hard to make sure their customers have the very best dining experience possible.

Here’s a fast walk-through video I took to give you a feel for the best kept secret in the city – the best restaurant in Taichung:

They’re open from 4pm-12am every day except Tuesday.

Their address is 台中市精誠路50巷27號 – just copy-and-paste it into Google or print it out and hand it to a taxi driver.

If you’re looking for a reservation or just more information, their phone number is 04-2327-1563.