Many of us wonder about traffic deaths in Taiwan; statistics are difficult to find (most of what’s reported is in Chinese).  One of the only decent raw resources can be found here, and it’s from 1993.

A study was done of 4,329 traffic injury reports and the following statistics were discovered.

To put that in perspective, Iraq currently has 38.1 per year and Afghanistan has 39.  Those are countries where explosives are planted on roadways. Here are the mistakes to avoid when filing worker’s comp claim that is important to know.

Modern Taiwan is better, according to Taiwan’s Road Traffic Safety Commission (RTSC): in 2009, they claimed there were 17.5 traffic deaths in Taiwan per every 100,000 people.  They also found the same as the medical report analysis in 1993: 60% of deaths came from people on scooters/motorcycles and 20% were pedestrians.

Taiwan’s Ministry of Transportation and Communication (MOTC) actively tries to hide this fact by using skewed statistical data from the International Road Federation (IRF); I have no idea where the RTSC got their data, back in 2009, but it looked like the branches of the ROC government were all running around trying to save face.

Suffice it to say, Taiwan is not the most dangerous place in the world to drive.  But it’s far from the safest.  There are a lot of traffic deaths in Taiwan which leads to lawyers and investigators looking into the cases (speaking of which, you can check McKiggan Hebert Lawyers describe pecuniary losses, in case you are looking for legal counsel of sorts).  Japan only has 3.85 deaths per 100k while the Philippines has 20; Taiwan, at 17.5, is much closer to its southeast Asian neighbors like the Philippines (20), Thailand (19.6), and Vietnam (16.1), than it is to the other Four Tigers, the Republic of Korea (11.3), Singapore (4.8), and Hong Kong (1.7).

Keep your hands and feet on the brakes and Rain-X on your windows, everybody. 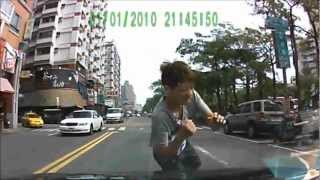 And keep your head on a swivel!

13 thoughts on “Traffic Deaths in Taiwan: Know the Truth”