There’s a lot of talk out there about the USA’s military budget.  You see a lot of graphics like this 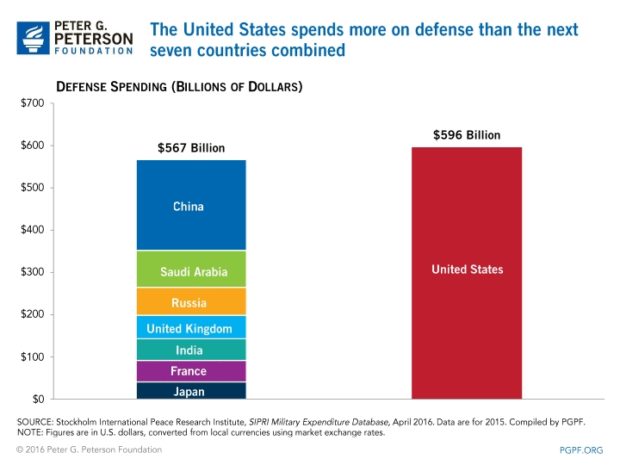 In 2015, the USA spent $595bil on the military.  China, France, Germany, India, Russia, Saudi Arabia, and the UK spent a combined $610bil on their militaries.

But this got me thinking about that Global Picture.

For example, if you take those same countries and look at their Gross Domestic Product, the USA’s GDP is $17.4tril while those combined other countries have a combined GDP of $24.7tril.

But even this is not really enough to properly understand the entire situation.  So I started hunting for the statistics.  The GDP numbers were easy enough to find: the World Bank keeps pretty good tabs on that.  The global military budgets weren’t as easy, because each time I tried to find a full listing, all Google spat back at me were articles showing the graphics like I showed above.  Finally, I struck gold on the Stockholm International Peace Research Institute‘s website.

So let’s get into it.

First, we’ll look at something that shouldn’t surprise anyone: the world’s Top 30 Military Budgets. 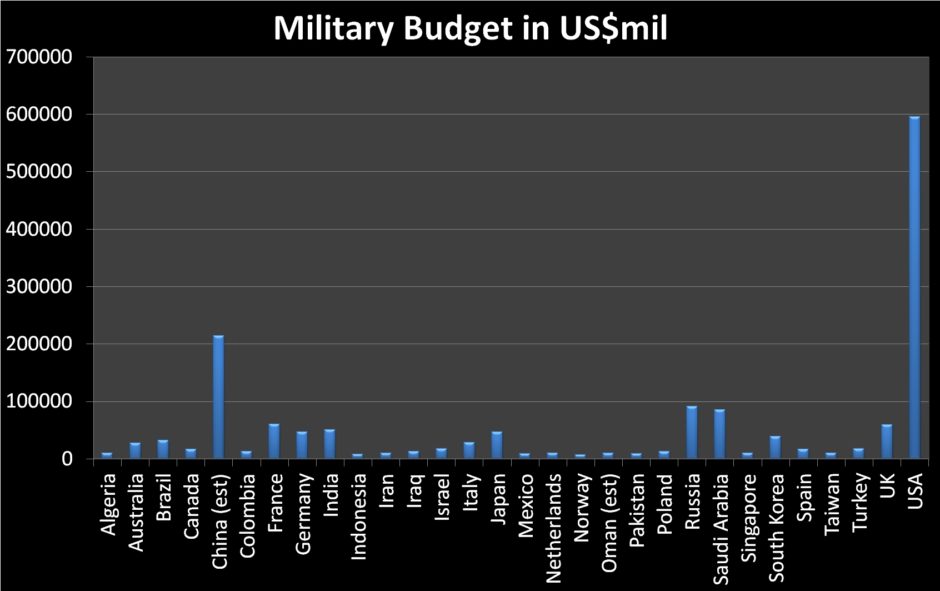 That’s the statistic used most often to show that the USA’s military budget is proof of their spending an absurd amount of money on their military, compared to the rest of the world.  And it’s pretty convincing, if you don’t look at the rest of the data.

So let’s look at it as percentages of the combined global military budget. 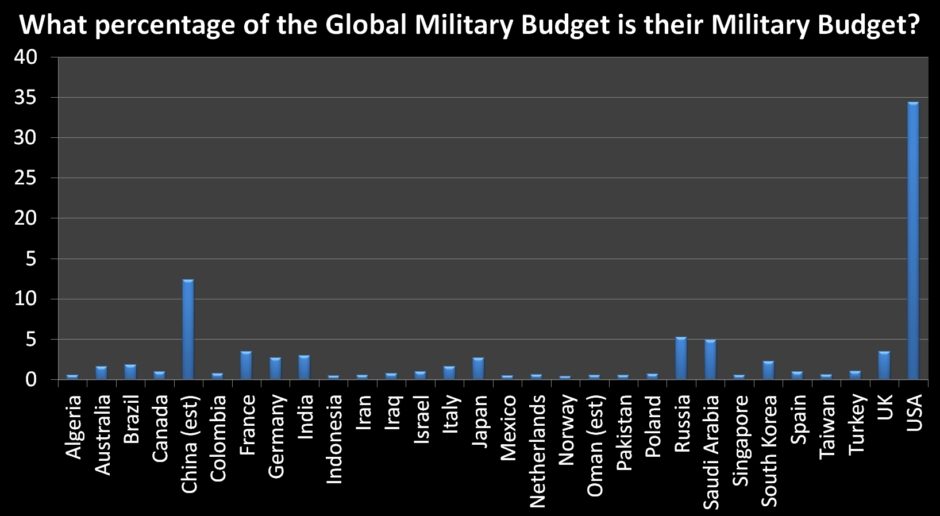 The numbers are keeping pretty consistent with our expectations: the USA’s military budget makes up 34% of the world’s combined $17.3tril military budget.  Also notice how it looks a lot like the last graph I showed you, with all the military budgets lined up.  Here, take a look at them side-by-side. 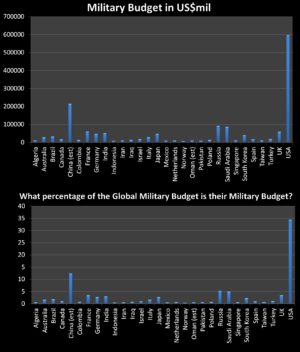 So we know that the USA’s military budget is the largest in the world, spending 34% of the total money spent globally on militaries.

Now let’s take a look at GDP the same way: as percentages of the GWP – the Global World Product.

That makes things a lot more interesting.  The USA’s GDP is the largest in the world and makes up 23% of the combined $76.6tril GWP.

All these things help to understand the massive size of the USA, but that is still an outrageously-high appearing military budget.  What can help that is looking at how much of the USA’s GDP is the USA’s military budget, compared to the same Top 30 countries. 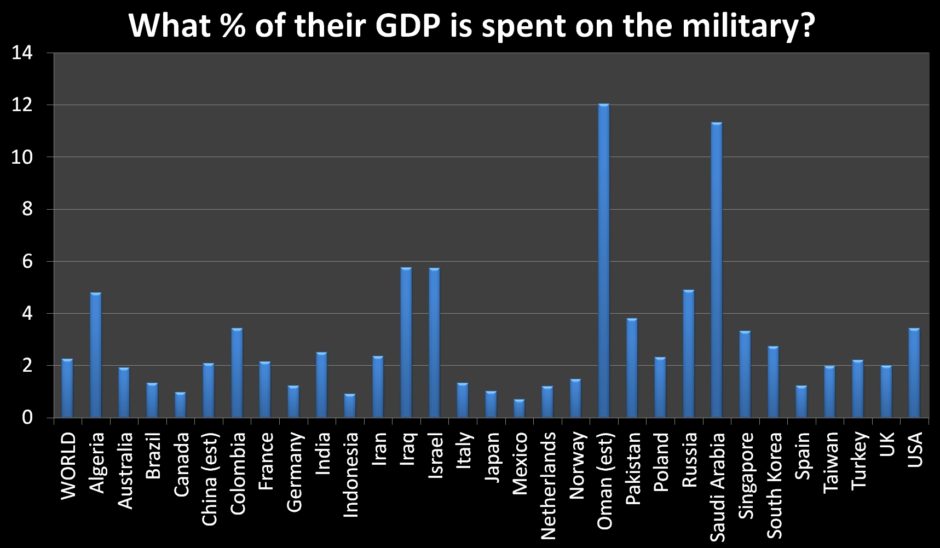 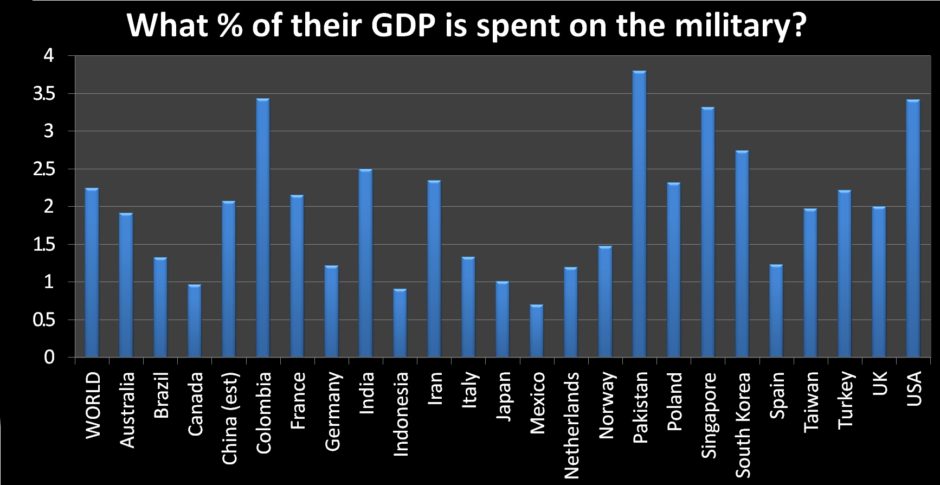 The USA is still high, but it’s not that high, compared to the rest, especially considering how much of a global military presence the USA has.  And these are just the Top 30 military budgets.  If we break down all 195 countries with a listed GDP at the World Bank, we don’t even know the military budgets for 33 of them!  Places like Cuba, Libya, People’s Republic of North Korea, Qatar, Somalia, Tajikistan, Turkmenistan, the UAE, Uzbekistan, and Yemen.  Places you read and have an immediate “I don’t want to live there” reaction.

The countries that spend the most money out of their total GDP on their military budgets are: 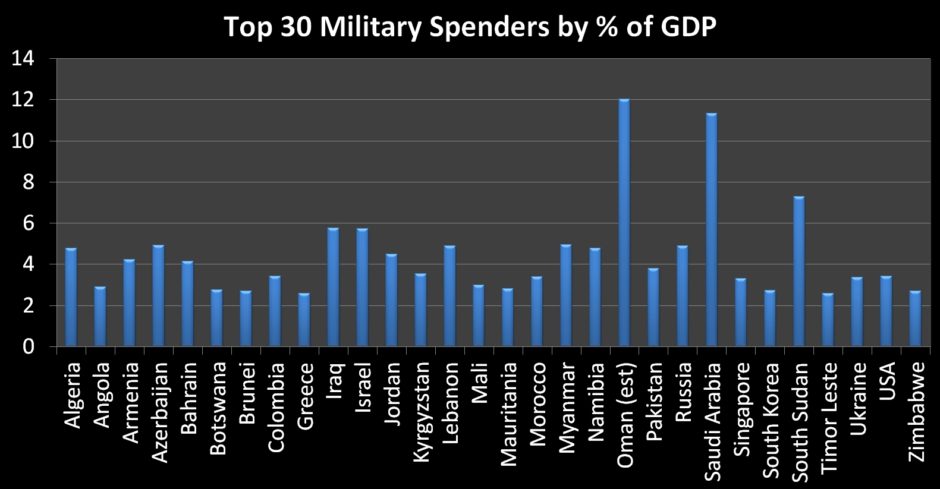 The USA spends the same percentage of their GDP on their military budget as Singapore: a city-state that has a global presence no larger than their island.  Even as a Top 30 spender, they are in the bottom 40%.

The USA’s military budget is obviously huge, but its GDP is also massive; both are a quarter and a third of the world, respectively, economically speaking.  It takes a large economy to spend that much money, but it doesn’t spend substantially more than other large-spending nations, most of whom don’t get accused of being war-hungry like the USA does.

One thought on “The Truth About the USA’s Military Budget”