I believe that every expat should have a YouTube Channel. Expats who don’t simply confuse me, for many reasons, the first of which being

What You Are Doing Is Cool

I don’t care if you’re going hiking in Nepal or getting coffee in a small town in Paris or just walking down the street in Taiwan: if you took a few 60-second (or less) videos every day and uploaded them to YouTube every day, you’d start to get a following faster than you’d think. If you’re planning to live somewhere that not many people go, such as Andorra, you could definitely find yourself an audience that is intrigued by your adventures. You might want to have a look at Andorra’s residency rules first, but there would definitely be people that are interested in watching your travels in a country like that.

Being an expat is fundamentally cool to the vast majority of people because they’re either envious or apprehensive, but either way, they’re interested. And it doesn’t even matter what it is half the time. They just want to see what different countries have to offer. One of my many friends visited Iceland recently to explore their hiking trails and other popular hotspots like The Blue Lagoon, and decided to document his whole trip. Even the part where he hired a vehicle from this iceland car rental was shown because he wanted to show people just how easy it is to get a car that is suited to driving on the treacherous roads that Iceland has to offer. So, it doesn’t matter how exciting it is, there are a lot of individuals who would be interested. People wonder what things are like in other places and the internet allows us great range in our search for answers. However…

There Is No Secret Formula

Whether or not something interesting happens in your video is the difference between it seeing 500 hits or 50,000 hits. And if something really remarkable happens, you could go viral, and see the millions. I prefer the “throw it all at the wall and see what sticks” method. For example, I have 200+ videos on YouTube, but 75% of my viewership comes from one video, which only really got popular when I chopped the length down from four minutes to one.

But there are rules-of-thumb. Shorter is better: no videos over a minute long. Tag them properly, so people find them when they search. Put keywords in the title and in the front of the description. Do it as often as possible, so you’re always active. Basically, just show what your life is like; even the stuff you think is really boring, you’d be shocked how many people would find it interesting. As of today (March 15, 2015) I’ve gotten 4000 views from of a video that’s nothing more than walking into Costco. Speaking of which…

Those Views Directly Relate to Money

That Costco video has made me US$10. That’s a four-pack of pork tenderloin at Costco. All because I decided to turn on my camera and then upload my stupid blah-blah.

Making money through TouTube basically amounts to this: every two-or-three views of a video should result in an advertisement view, and then it’s just a matter of how many ad views it takes to make a dollar (one view is good while 1000 views is bad). In the first 14 months between when my new/current YouTube Channel started in July 2012 and October 2013, I averaged 6,000 views a month. This last December I saw ten times that. Basically, in the first six months of my channel’s life, it didn’t do jack.

But after the first six months, I started to see serious improvement. It takes time for the system to recognize your content and for people who are looking for it to be able to find it. Take a look at 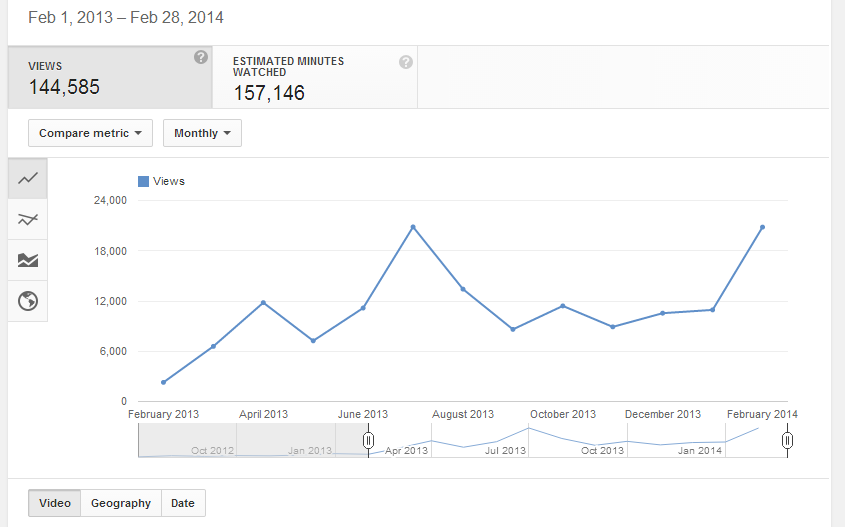 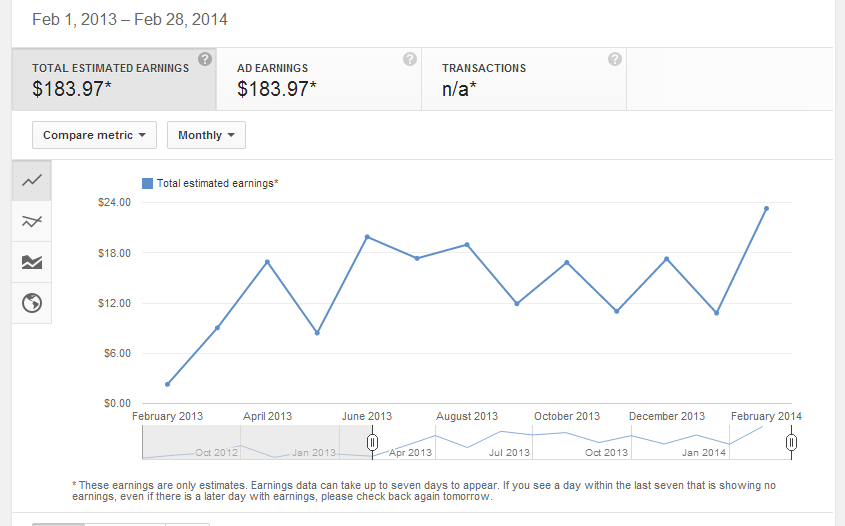 So my first full year making money on YouTube (in 2013), I made US$180. In 2014, I made US$300. In the two-and-a-half years I’ve been doing it, my videos have gotten a combined 450,000 views and have made me around US$550. It’s not a lot of money, but that’s US$550 I made for doing nothing more than uploading video of my world: in other words, stuff I was doing, anyway, because I know I’ll want to look back in twenty years (that’s the same reason I write). Even if it’s just to show friends/family back home what you’re doing abroad (which is exactly how my channel got started), it makes sense to upload often and monetize your content.

But that’s not the coolest reason to have a YouTube channel. I started blogging in 2011, but I began hosting jsphfrtz.com in February 2013; what started at a few views a day two years ago now sees five hundred a day. My YouTube channel in Febrary 2013 got 2,000 views but last December it saw 80,000. Growth has always been consistent and exponential. On any given day, around 1,000 people – which is not even that large of a number – are influenced by content I have created. That’s still a really cool feeling. I was doing it before I made any money from it; the money is just icing on the cake.

Because What Are You Doing Here?

You’re an expat. You live abroad. Why? No matter what the answer, I have a follow-up: why aren’t you documenting what you’re doing? Because I can guarantee that, whatever you’re doing, there are people interested in seeing it. Pictures are good but video is better. People like video, especially short little clips; no one is cruising your 30-picture vacation albums on Facebook, but they might watch a 1-minute video of something if you post it.

Chances are you dig adventure and probably have some ideas about the world you find yourself in. It makes sense to share your unique perspective. Chances are, because of the relatively small amount of people who create content (compared to those who view content), you’ll be a sought-after source for people within a year. I have people hit me up all the time after viewing my content and ask for my advice/opinion. It often brings business to my consulting firm. One of my good friends in Taiwan recently told me how funny he finds it that he now hangs out in my living room, which he first saw the first time he clicked a video about Taiwan when he was thinking of moving here. It feels good to be in-the-know, to develop yourself and the information you control, and to be known and paid attention to: that’s just reality.

And there’s nothing stopping you from getting to this very basic level of “content creation prestige,” beyond remembering to press “record” and then “upload.”

6 thoughts on “Why Every Expat Should Have a YouTube Channel”